skip to main | skip to sidebar

You could say Eto is having a moment here in the early part of 2019. The first quarter is always a good time to come out if your name isn't ringing out - and his certainly isn't where it matters for a music career today. But that might be changing. Having already gotten high praise for his very thorough collaboration with DJ Muggs Hells Roof (a must listen if you haven't) he isn't letting the positive attention slow him down with another single producer collaboration dropping on the 12th of this month. The first taste of it is here and Superior concocts a brilliant loop for Eto to deliver his vivid description of that street life and the rap life. It takes a special emcee to handle a drumless track and Eto is just that. No he won't cuddle ladies. Yes he will confront you if you do him wrong. Hard doesn't even begin to capture his whole vibe. Some rappers just carry themselves differently. Eto is one. It's nice to hear someone making classic 90's inspired rap without coming across tired. Forget whatever wannabe throwback artist is being hoisted into your face via the music media and listen to Eto, you won't be disappointed.
Posted by Will Johnsen at 10:52 AM No comments:

Trizz has always been an exciting emcee to me and yet I don't think I've given one of his nine projects a front to back listen. He carries himself like a traditional gangsta rapper with the flagrance of his age and the wisdom of someone whose been through the shit. He embraces his past without glorification - honest bars from a mind molded by the streets. "Thanos" sees him speaking about his bad habits and the people in his circle, flexing his smooth flow over a sparse beat filled with heavy drums and little else. If this doesn't get you to check out his catalog you should probably just walk away now. Off The Basement, which dropped today, it's a great introduction and worthy of your ears.
Posted by Will Johnsen at 12:01 PM No comments:

"I hide hooch in my boot I'm a cheap date"

Philly's own Zilla Rocca has steadily been dropping gems for years, showing off his trademark style of Noir Rap. Always a fan of off beat samples and dusty drums, the title of this track sums up his sound well. Smooth and brutal without being a contradiction if that makes sense. Over a guitar loop and some clutch vocal chops Rocca is given the perfect sonic tapestry to deliver a story about style, despair, unsavory characters and his own personality traits - some to be proud of some not so much. Vivid with imagery and spit in a slow flow to rival the best it's hypnotic and captivating. Watch the video and check out the album it's off, Future Former Rapper, issued by the inimitable POW Recordings.
Posted by Will Johnsen at 1:41 PM No comments:

Kev brown has always spoken through his beats better than many emcees do with their words. "The Curfew" is no different. Filled with images and a message of black excellence far beyond anything Jigga has ever spit - it's inspiring and worth eight and a half minutes of your day. Vibe to it y'all and have a great day.
Posted by Will Johnsen at 9:29 AM No comments:

Ian Isiah gives you so little of a jumping off point. In describing the project to my mom I told her it would probably evoke Prince for her. But damn those are some big shoes for a young cat to fill. And pressure is the last thing an experimental musical mind needs in his ear. I'm all for pushing boundaries and testing the water with any and all the ideas that come to your mind while recording. This is the beauty of our modern day recording industry. Yesterday I reviewed an album that had it been done a few years prior it would have certainly been given the major label roll out to the max. But instead it's destined for internet purgatory every so often getting dug into by some curious ears.

I digress, you aren't here for more thoughts on Starlito. Today it's all about the sultry and steaming hot Shugga Sextape, Vol. 1. Considering his last album dropped in like '13 don't be holding your breath for a soon to come volume 2, but this 28 minutes is concise and pretty perfect for the cuffing season we have suddenly found ourselves in - ok I shouldn't complain about the weather, the summer went late and it's really only started to get cold in the last couple weeks and even then that's just for the morning and evenings. Shit I even had enough sunlight out today to go for a walk and soak up some of Mr. Isaiah's croonings blended with that Vitamin D!

Don't go into this EP (I don't care if he is trying to dub it an album it's 8 tracks and less than a half hour long, it's a goddamn Extended Play - so what if you want to call me old school.) ready for the turn up. Sure "Bedroom" & "Killup" will have DJ's quick mixing in and out but what you are really here for is the meat and potatoes of Ian's soul.

"Persistent" is a tune I keep returning to, it's hypnotic beat is filled with off kilter drums, some reversed sounds that I think oscillate into going forward in the background. And yet all these goings on will be forgotten as you listen and try to decide if sipping the Henny is actually superseding the quest for pussy. Most of my male readers, and probably more than a few of the female ones too, will be more than excited to introduce their lover to this song as it feels like the perfect foreplay jam ready to keep whoever is luckily receiving squirming as they wonder what's going to touch and enter their body next? This is no sex ed column, you are on your own this time, and if you know your lover than it shouldn't be too hard.

Ian Isiah is a complicated man and while I won’t begin to try and break down the churches disgrace in finding pleasure in sex, Isaiah confronts this head on and does so without breaking stride. The aptly titled “God” pays tribute to that special lady in his life whom he has placed on the highest of pedestals, many religions would crucify him for representing a false idol like that - but how are any of us to know who the next coming will be? Spend some time fondling your significant other and you might just know it’s them. Just what Ian Isiah wanted for Christmas - for things to get just a lil’ bit freaky round them Christmas lights and inflatable characters.

In all seriousness though - play this at your adult friends pre/post Christmas gathering. Pass it along to the couple you know is trying to get pregnant, or just put it in everyone’s stocking and tell them it’s not the typical holiday album but it is guaranteed to bring out that holiday cheer - along with some handcuffs and blindfolds perhaps?
Posted by Will Johnsen at 7:34 AM No comments: 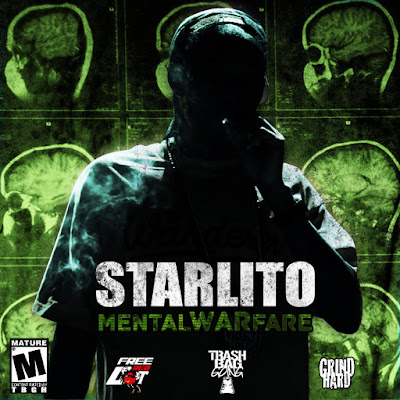 Starlito was fresh off the DJ Burn One collaboration Renaissance Gangster when he released Mental Warfare. Where the former was a country rap tune classic meant for riding and smoking in the haze of a late southern summer, the later was ‘Lito delivering a masterpiece of modern conceptual rap - taking the listener through the mind of a hustler and the psychological toll a life in the trap can take. The album is separated by individual moments of captured intimacy with ‘Lito. Speaking genuinely and from the heart he sheds light on the moves he has made in the past and how he is navigating life at the time. It paint’s a positive picture of mental clarity, but not without plenty of missteps and questionable choices rooted in loyalty and a devotion to a strict inner code not to be tampered with regardless the test.

“Hope For Love” opens the album as strong letter to whoever might be listening. Throughout his career Starlito has delivered biographical tales with ease. This is no different and sets the stage for an excellent portrayal of a mind ready to split under the pressure. This first suite of tracks is closed out with an unsung Sonny Digital classic, with Starlito showing off his commercial viability on “W.T.F.” Don’t sleep on this jam, it should be on every party playlist for the rest of time.


From here on out the album takes a dark turn. “Live From The Kitchen” is just that, a snarling track oozing the dirt and grime present when you are in the trap house. Starlito has never pretended to be anything other than a young, business minded individual who know how to work with words even better than he does a scale. “Back With the Shit” & “The Ville” keep the energy level turnt and continue with the musings about making boss moves in the streets while also making room to consider his mental health and the damage he has inflicted upon himself on his journey through the drug game. The album transitions once more bringing in DJ Burn One and his 5 Points Music team (Go Ricky! Go! & Walt Live) to lay down the perfect country rap tune in “L.E.A.N.” driven by just the right groove Killa Kyleon, Young Dolph & Starlito all revel in some sordid tales about sipping and fucking. “Substitute” keeps the Burn One vibe rolling featuring a muted drum track and Ricky’s guitar crying in just the right key in the background - all of this just to give ‘Lito the space he needs to come clean and be honest with his main lover. Starlito regularly has demonstrated his affinity for women, and yet he also is consistent in making tracks analyzing the struggle he endures internally as to why he can’t remain faithful. I wonder if he knew this track would spur and entire sub category in his cannon years later?

Mental Warfare is six and a half years old. I’m a self professed Starlito stan and will always be going back to his music. However, while I was hip to ‘Lito and the release of this when it dropped, I can’t say that I had ever really given it it’s due like I have later albums of his. Who knows why I overlooked it at the time. Part of me suspects that I found it a little too trap, I took the Burn One jams and overlooked the rest. What a disservice I was doing myself. And if you haven’t heard this album you are doing the same to yourself. I’ve come to terms with the fact that 'Lito will never garner the attention or appreciation I think he deserves and that is ok. His catalog is here and not going anywhere. I’m always gonna be preaching the gospel and today I’m happy to have taken the time to analyze one I hadn’t considered. It’s complex and vast in it’s concepts. But it’s quintessential trap and should be in any conversation about the genre.
Posted by Will Johnsen at 5:31 AM No comments:

More radio goodness for y'all to rock too! This week I started out with some funk, took it back to some 90s NY hiphop, and jumped into the sounds of the future. Killer Mike, Jeeks, Stevie Wonder, Terror Danjah, Jay-Z, Charles Bradley, Rick James and of course a SOTA tune just to name a few of the voices making appearances in this week's edition of TML Radio.

Download Part 2.
Posted by Will Johnsen at 9:47 AM No comments:

The Sites to Check